...and while I'm explaining tags, I may as well explain this one too.

'metaphor for passion' is the working title for a project of mine that started in high school (or at least, that's when i started drawing the characters that would later go into this story.) it's constantly ongoing... in the end (if it ends) it'll be a graphic novel. assuming it gets published someday of course, who knows. i'm just taking the Flight attitude of drawing it first, then seeing what happens.

I've got a lot of it written in my livejournal, but the writing has been at a stall since last fall and I've mostly just been drawing stuff in my spare time. still trying to get the character designs tacked down, and to figure out just how fantastical this world is that they're journeying through.

if you read the story, the various environments the characters pass through might seem very like places on our earth, but i'll do my best to make them less.... common in appearance once I've gotten farther along.

a previous working title was simply 'Puppet, Cat and Blanche' since these are the main characters on this journey. buuut I changed it.

at any rate... the drawing above was drawn sometime in the past week, between working on notes and presentations for the art class I was co-teaching. it was drawn quickly which is why it's not very interesting... but, whenever I'm stressed or sad or just not myself, drawing Blanche in particular would make me feel better. (she's the first character I came up with.) perhaps at a later time I'll post some older variations of her, but these are some more recent drawings. (I was missing Matt very badly while drawing a couple of these, you can probably tell which ones.) 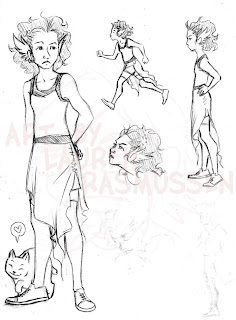 (accidentally deleted the original color profile of this scan; it was drawn in blue. oh well) 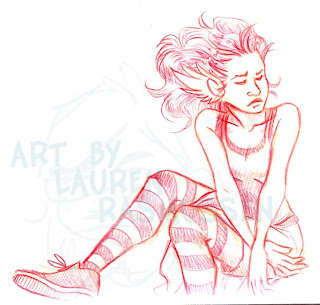 i've been meaning to capture and draw my cat for some time now, just because the cat character has always been painfully cartoony and made-up looking (which is something that always annoyed me about Disney's Cinderella) so i'm trying not to duplicate that. the puppet is a stuffed dinosaur though, so he's fine. :)

ta.
Posted by Lauren Sparks at 9:26 AM No comments:

HELLO howdee-hey et cetera! if you've been to this blog before, you may have seen that one of my tags is called 'Walk the Moon'. if you've never actually tried to figure out what this is, Walk the Moon is a band here in Cincinnati that I've been working with for a few years, doing their album art and t-shirts and stuff like that.

now, i would do album designs for a band whether they're good or not (as long as they can pay me, haha) but Walk the Moon is a REALLY GREAT band. yes I'm plugging them- they linked me to their blog so i'm linking to theirs! hooray for linking and also linking. speaking of which, their myspace is where you can hear a LOT of their music (including professional recordings, live recordings and even some lo-fi stuff that sounds as though it may have been recorded in Nick's basement but is still AWESOME) and links to get their albums already out. so check it out. :)

so as a treat, here is a page of concept art for their new album which will hopefully be out later in the summer: 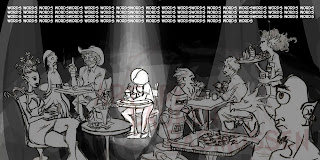 it is for the inside of the booklet. ALIENS, yes. if you want to see some other designs I've done for them, click the tag. I'll be at the acoustic show later today-- will I see you there? :)

ta.
Posted by Lauren Sparks at 8:52 AM No comments:

yup, here they are finished. WOOT. I actually like the ballpark BG, now that it's DONE, haha. this one's drawn in pencil and colored in PSCS4: 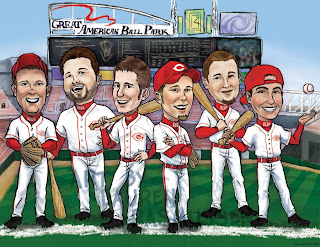 and this'n is ink and watercolor. Scanner ate the colors and spit them into space. there were lots of tiny blue shadows in the dress, and... I shall stop whining now. you can see the lines; the lines are good. the colors are good too, you just can't tell in the scan. :) 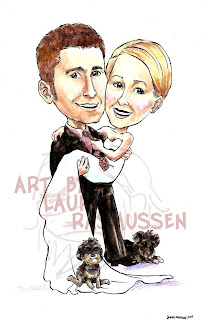 Posted by Lauren Sparks at 9:21 PM No comments:

ever since reading Brenna and Andy's journal comics I've wanted to do a series of my own. and I always hoped it wouldn't turn into me wallowing in self-pity and general self-centeredness. haha... too late already. 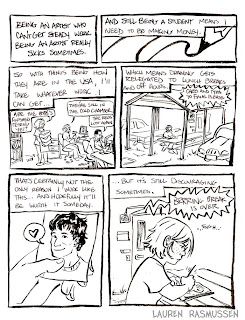 hope I can do more of these soon...
Posted by Lauren Sparks at 9:00 PM No comments:

pure, pure irony. as long as I worked at Kings Island drawing portraits, and as many years now as I've been studying character design et cetera, I haven't ever done any good-old fashioned caricatures. well, now that I've been hired cold to do one I'll have an example to show people, haha.

not that I ever doubted I could draw these, they're pretty easy actually. fun too. just never had a reason to do them. anyhow, drawing- guy named Justin is getting married later in the month, and this will end up being him and his groomsmen looking very professional and disproportionate down at great american ballpark. (learned a fair amount about baseball for this too.) 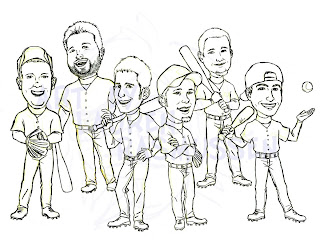 Posted by Lauren Sparks at 5:09 PM No comments:

yeah, posting is slow. there are lots of drawings that can be posted, but they are still either A. cannot be released yet, due to secret plannings etc. B. are good drawings but just haven't been scanned yet due to computer-obsessed siblings and/or utter madness, stress, and other work and commissions.

but this is finished. :) a commission for a friend- evidently it's an inside joke, and that is why it makes no sense. I just drew what he told me. so, initial drawing (complete with victorian bathtub and funky perspective!!!!) 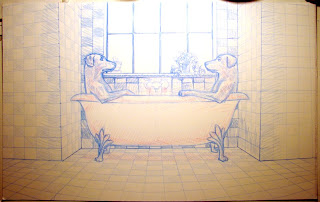 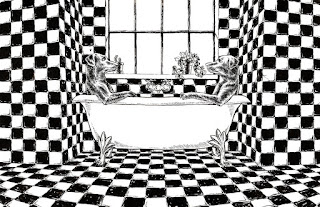 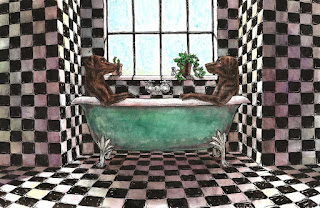 shadows came to be a lot more purple than the intended blue (and the scanner made the colors look even worse than they are), but I suppose it turned out well for having been rather rushed. ok, "work" is starting. bye! :)
Posted by Lauren Sparks at 6:59 AM No comments: