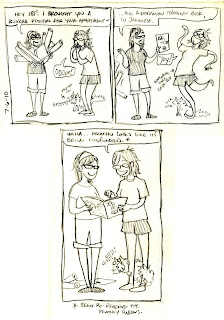 Posted by Lauren Sparks at 4:33 PM No comments:

YESSS. Montgomery Hall access gained!!! I now can readily use a scanner.

been working on some character concepts for my bestest friend Amanda Scott, who is an awesome writer. once I get some more drawn those will be up!

SNEAKY PREVIEW: the character's name is George, and at some point in the story he parachutes out of a Cessna right before it crashes into a cliff. :D
Posted by Lauren Sparks at 9:06 AM No comments:

Speaking of "Like Lightning", I just realized I have a finished looking draft of the first page that hasn't been posted. the 5th page also is far enough along to have a look at.

for review, "Like Lightning" is a 9-page full-color comic about a photophobic man who finds a lightning bug in his dark room. when night falls, he leaves his haven to try and find the lightning bug a new home. 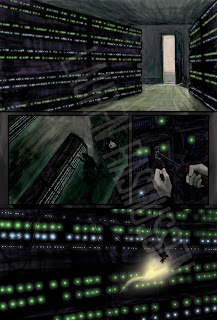 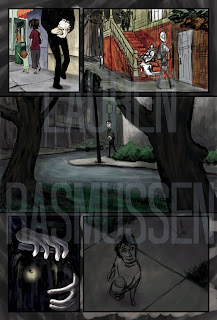 and here's a WAAAAY rough sketch of the cover. 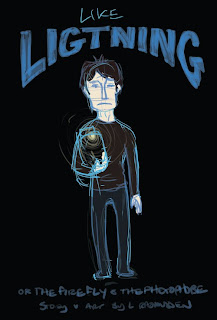 sooo, I *acquired* access to a scanner this morning and was able to scan in some stuff that I've been wanting to, including a non-sucky rescan of the short comic I made based on Walk the Moon's song, "the Ballad of Sebastian Jackson". (yeah, you see that comic in the blog shoutout about me? that's the sucky scan. cuz I had a sucky scanner. there are ton more tones in there than what came through. but this one looks oh-so-much better.) I'm thinking of printing it as a minicomic; gonna ask Nick if he wants copies for the band merch table. INDIE COMICS AND INDIE MUSIC TOGETHER!!!!

and here's a character design I've been messing with; inspired by black-and-white photos of Audrey Hepburn and Cyd Charisse. man, photographers used to know how to PHOTO. they kept it simple. I love all those old BW publicity/portrait-like photos. so clear and awesome.

I honestly can't remember if I've posted any drawings of her before, so here they are again. o___o 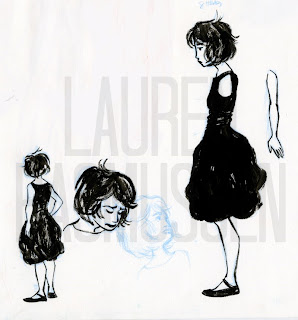 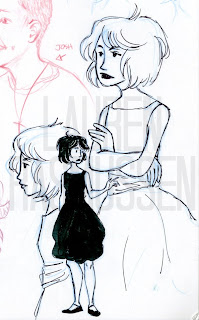 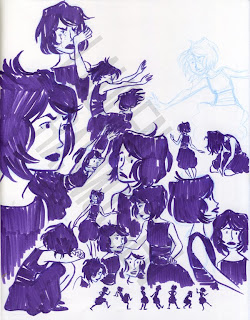 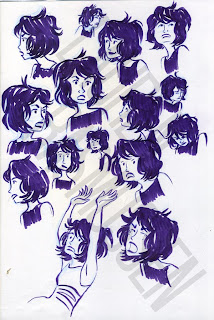 her name is Annabel. there's a story for her mouldering in my cranial cavity.

and now, some random stuff. A house next to the church where my brother takes violin lessons: 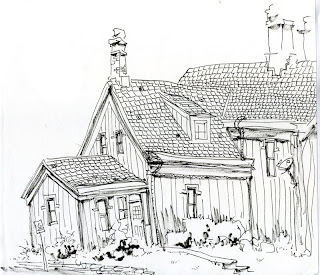 also, here are lame character sketches of my titular photophobe for the story "Like Lightning" which I have been digitally painting for some time and it is taking FOREVAAAAR. oh well. it'll be done eventually. 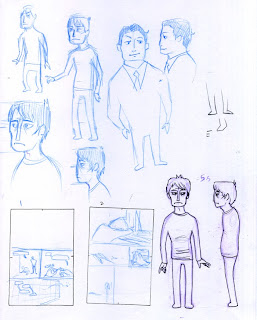 the character proportions are inspired by The Windwaker concept art. those dang Nintendo people are AWESOME. 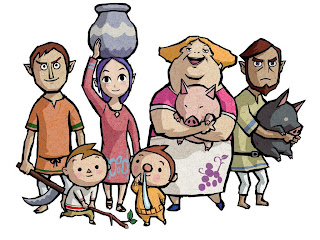 Posted by Lauren Sparks at 10:06 AM No comments:

Woohoooo! got started yesterday evening on the project that Zelda Vinceguerra and I have been hired for - nailed down some tentative character designs. we'll be starting storyboarding this evening. I'll check with our boss as to whether or not we're allowed to post concept art etc. on our blogs... stay tuned!

In the meantime, I'm compiling a couple new minicomics and really need a scanner.

after being visually assaulted by submissions for Sketchoholic by Chrystin, Matt, and Zane - pretty much all at the same time - I figured I should prooobably check it out. :D 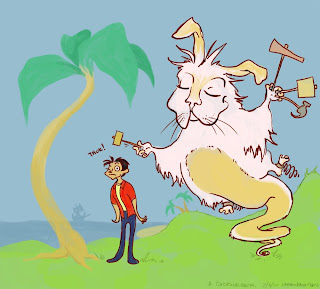 sooo, this is for the shut up and draw contest of the day! time to put those typing and babysitting muscles to rest and get the drawing and animating ones up to scratch once more. .... looks like it may take a little while. :D

THOUGHT PROCESS ON THE DIDDLEBOP: when I read the word diddlebop I first thought of little bunny foo foo, bopping whatever on the head. (yeah, I was a Barney watcher about 18 years ago. looks like some of the other participants were too.) :) and then the word itself, diddlebop, eventually struck me as something that Dr. Seuss would make up. so, there you go.

Excuse me while I go put some aloe on my delightfully tomato-shade of sunburn on my left arm. yup. I'm back in Savannah!
Posted by Lauren Sparks at 8:05 PM No comments: