OK dudes, the quarter is ALMOST OVER! I'll be getting my sketchbook back from Webber later today, so I'll have a METRIC TONNE (OK maybe not) of sketches to scan and upload; realistically not til after thanksgiving, but you never know.

To tide you over, HERE. have an AWESOMELY HAPPY music video by Walk The Moon. LOVE THEM. BUY THEIR ALBUM. :)

The first emotion that I felt when The Illusionist ended and the credits began to roll was pure awe. It’s been a long time since I’ve been so impressed with the maturity and beauty of a film (animated or no). The second emotion was depression. It’s difficult to believe that I’ll ever be able to animate with such control, beauty and finesse. Maybe I’ll just draw comic books instead.

The most impressive thing to me about the film is the visual style and execution of it. The backgrounds looked to be drawn in ink and then painted with watercolor; I assume with the ink and different watercolor treatments on separate levels. Watching the time of day or the sunlight change over the different locales the Illusionist and Alice visit made me catch my breath a few times. The animation itself could be described with a lot of the same words as the backgrounds – very subtle, with attention to detail, and enviable control. No movement is wasted with any of the characters – every movement that they make has something to do with that character’s personality.

Because The Illusionist has such a quiet story, it allows for humor at things much more subtle than outright jokes. Indeed, since the actual dialogue in the film is so minimal, there ARE no actual jokes. All of the comedy lies in the situations the characters find themselves in, and in the eccentricities of the characters themselves; and though the ending of the film is somber, it is a story with an unexpected amount of humor.

The scene that stands out the most to me for humor and suspense is more than halfway through the film. The Illusionist has just returned from a rather harrowing night attempting to be a garage hand. When he gets back to the hotel room that he and Alice share, she has dinner ready (prepared from a cook book lent to her by one of the hotel’s other eccentric inhabitants). Alice has made enough to serve several of her friends of the hotel, and is constantly going in and out of the room with bowls to take up to them. In one moment when she is gone, a breeze from the window blows the pages of her cookbook, and the pages rest on a recipe involving rabbit. The Illusionist – and we – are left in suspense for the magician’s rabbit; naturally he is loathe to eating his soup, and his worry and searching for the rabbit every time Alice is gone is just wonderful comedy. The timing of this scene – and all in silence! – is just perfect.

The overall story is such a difference from the majority of American animation! Probably due to it having been written in a much more subtle era of film. The majority of American animated features are a joke every other minute. This film’s story was so quiet, it allowed for attention to detail and humor in the smallest things. It also gave time to just marvel at the gorgeous artwork; to breathe and just LOOK. Some of the most memorable scenes were actually subplots with side characters – I don’t know if these little vignettes were in Tati’s script, but whoever is responsible for them did a wonderful job.

All of the animation for my senior film.... is hereby FINISHED. *cockroach under my desk tries to chirp like a cricket and fails*. This has, in terms of workload/sleep deprivation, been my worst quarter at SCAD thus far, but it is almost over! With my senior film finished, I have only to take Craig's portfolio/reel/website/everything else class next quarter and I will be finished with my major. With that, I have three classes left to my Sequential Art minor and I will be, ladies and gentlemen, a SCAD alum. *cockroach scurries away under the bookshelf*.

If anyone is still around to read this after all the neglect this blog has gotten the past couple months, here's a doodly doodle of a girl who could possibly be named Anna Sun, after that Walk the Moon song. 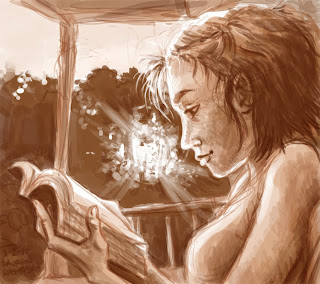 Speaking of which, people, Walk the Moon's album release party is THIS SATURDAY. if you are anywhere near the Cincinnati area, you should totally go. They are the epitome of awesome, especially Nick, because I said so. Info about that show is heeyah.

Last week I had the immense privilege of seeing a TON of awesome moving pictures at the Savannah Film Festival; one of the biggest highlights for me being Sylvain Chomet's new film The Illusionist. It will be released in New York and LA sometime in December to qualify for the Oscar, but it is also screening at CTN Expo next week so maybe it's got a few more gigs around the country as well; I don't know. either way, it's a GORGEOUS film (by Sylvain Chomet, it's impossible to not be gorgeous). if you have a chance to see it, please do. I wrote a review of it after the screening, and will post that up here in a little bit.