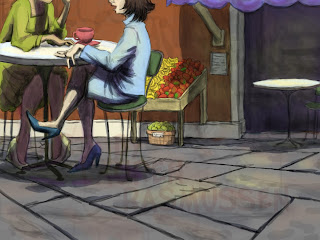 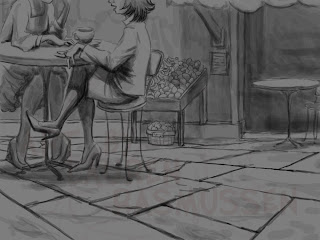 first pass on that background for Jacques: total realism.
this is the black and white rendering (well, just black, worked on gray.) will start the color next. YAY digital painting. (photoshop CS4)

WOOHOO poster design. and not just any ol' poster... 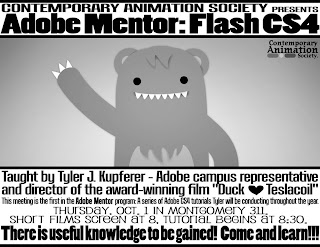 but a poster advertising TYLER doing a flash workshop at the next CAS meeting!!!!

I was able to see Tyler's film "Duck Heart Teslacoil" at this year's SCADanimate program, and it is AWESOME. Tyler is a great filmmaker. this is his website, Base14. his film isn't available online, but if there happens to be a showing of it (or any of his other films) near you, GO AND SEE.

also, I made an awesome poster for this week's meeting. yay. :)
Posted by Lauren Sparks at 9:16 AM No comments:

Song of the Sea!

yeah, this has nothing to do with me, but Cartoon Saloon (makers of Skunk Fu and The Secret of Kells)'s director Tom Moore has this as his next project:

Song of the Sea, a story about a Selkie, evidently. I've read fairy tales about Selkies, I'm glad someone's making a move about them!!! soooo.... be looking for this one in theaters, in europe only, probably around 2011.

sigh... sometimes it sucks to be an american. :P
Posted by Lauren Sparks at 11:18 AM No comments:

The Secret of Kells Review

“The Secret of Kells” is an Irish animated feature film, set in the dark ages of Ireland. The main character is a young boy named Brendan, and his learning about a sacred book and wanting to help its keeper complete it. There are two main forces influencing Brendan: his uncle, the Abbot of Kells, and Brother Aidan, the keeper of the sacred book, a famous illuminator who comes to Kells after his island abbey is destroyed by the Vikings (who are headed for Kells). Both of them want to pass on their conflicting beliefs to Brendan, and he must choose between them; methods of defense from war from the Abbot, and the importance of passing on knowledge and hope from Brother Aidan.

The story itself isn’t entirely groundbreaking, but is still told very well; though the ending is a tad disappointing. The animation and acting is wonderful, each character has his own personality, shape and voice. I was also impressed that the resident ‘animal sidekick’ was not pointless, and even helped the story along. The aesthetic is very interesting and well done; in particular some of the methods of cuts – or lack of cuts. Often, especially near the end of the film, several different locales will be shown in sections on the screen, and we can see the characters move through them as they travel. Because of this, in many sections there are much fewer cuts than there could have been, but what’s on the screen still holds the attention of the viewer.

The visual style is the strongest part of this movie. Much of the film’s conflict is around the Book of Kells, which is an actual illuminated text from around the year 800. The book is known for its rich illustrations, and “The Secret of Kells” takes very well the cues of artwork from that particular book as well as the period.

The groundwork for the style is that it is mostly based on flat but highly detailed backgrounds; much like the tapestries and other artwork from the Dark Ages before perspective was fully understood. Within that groundwork, the character designs are also based around very flat shapes, but the characters keep to solid colors, which makes them distinguishable from the backgrounds very effectively. Older characters are much more textured with separate shapes for every joint, but younger characters like Brendan and the other abbey children are much more simple and soft looking. The only time perspective is used in an upshot or downshot is when there is danger or action, and the bad guys themselves have an even more exaggerated style than the main characters, making them even more frightening.

Another fun touch is some of the character’s names. Pangur Ban, Bother Aidan’s cat, is called after the medieval poem by the same name, which happens to be – appropriately – about a traveling poet/monk and his white cat. The poem is spoken aloud over the credits, in old Irish, about halfway through them. The Abbot’s name, Cellach, is the same as several real Irish bishops from the time period. Aidan is the name of an Irish saint. A fairy/weregirl that Brendan meets in the forest has the name Aisling, which is the old Irish word for ‘poetic vision’ or dream.

The only weak parts in the movie lie with the story. The overall pacing is all right (it is very good at the beginning of the film, then lapses in parts throughout); but there are loose ends that are never tied up and leave it wanting. The largest single issue is the monster Krum Kruack (spelling unknown), the huge monster with the crystal eyes. The first time we hear his name is when Brendan nearly walks into a dark cave, and Aisling warns him to come back, because it is Krum Kruack’s lair. Brendan doesn’t believe her; says the monster is a fairy tale. But almost no other explanation is given about the monster – where it came from, why it hides in caves, or any other stories about it.

This may be only an issue for American viewers, if the monster is a common facet of Irish legend. But it appears the monster is purely an invention of this story, and so it really needs more explaining; especially since Brendan must return to Krum’s lair later on to defeat the monster.

There are numerous other small issues, both of story and character. For instance, it is never explained just how the Abbot and Aidan already know each other. Additionally, why exactly is a crystal needed to complete the Book of Kells? After multiple viewings, it can be assumed that a crystal is used as a magnifying glass, a tool to create the tiny, intricate designs in the book. But then, why does the book need to be illuminated? Aren’t the words the most important? Why exactly is it so important for the book to be finished? And why not any crystal – why does it HAVE to be this one particular crystal? Again, after multiple viewings it can be derived that the book is a symbol of knowledge and learning, and also hope. But this is barely alluded to in the movie overall.

There are other issues and holes with character as well. One strange thing is that it appears that Brother Tang is the only person in the movie who doesn’t age – after 10 or 15 years have elapsed, he is still the same white-whiskered but sprightly monk as before, though all the other characters have aged appropriately. There is the same issue with Pangur Ban, especially because he’s a cat.

Most of the character’s personalities hold true, but the Abbot has a particularly disappointing twist. Through most of the movie he is shown to be a very strong, hard, determined, but also caring man to the people in the abbey and his nephew Brendan. But at the end, when Brendan is finally able to return to Kells, the Abbot is shown to have fallen apart mentally, and has sunk into depression and despair because he believes he is responsible for Brendan and Aidan’s deaths. It seems more likely, considering his character for the first section of the movie, that he would have come to his senses and used his strengths to protect what he had left from the raids in the name of Brendan and Aidan, instead of wasting time despairing over what can’t be righted. This would have made more sense in the overall scheme of history and the naming of the book. But despite this, the ending is still appropriate and fairly satisfying.

Posted by Lauren Sparks at 9:58 AM No comments: 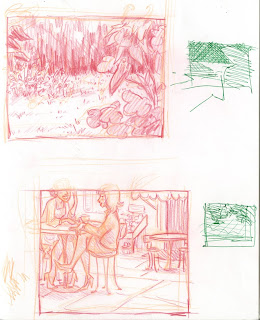 hm. maybe I'll show this to Jacques. it needs sparkle.
Posted by Lauren Sparks at 12:02 PM No comments:

I like how these turned out too. so here they are. YAY 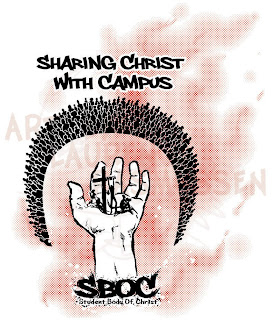 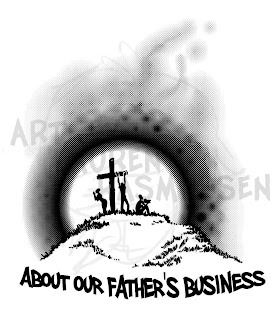 Posted by Lauren Sparks at 10:11 AM No comments:

logo/tshirt design for a student group up at UC! :) I'm doing a couple more designs for them; might post those as well once they're finished.
(fonts: philly sans/bee marker from dafont)

also also, BACK AT SCAD. so there will be homework appearing up here soonish, assuming it's worth posting. whee!
Posted by Lauren Sparks at 12:53 PM No comments:

to get back in the swing. :P


class was canceled this morning. Jacques is still in Montreal.

funny how richard williams, eric goldberg and scott mccloud all use a similar scenario to illustrate a point.
Posted by Lauren Sparks at 11:27 AM No comments: 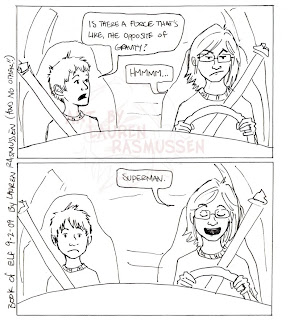 ben's face is messed up in the first panel. oh well, i still like it.
Posted by Lauren Sparks at 9:51 PM No comments:

the steps appear as I step 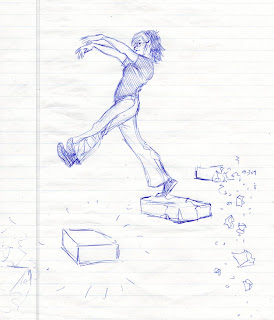 MILT KAHL TRIBUTE BY THE ACADEMY HERE WATCH THE VIDEOS. EVERYONE SHOULD KNOW MORE ABOUT THE MICHELANGELO OF ANIMATION!!!!!!!!!!!!
Posted by Lauren Sparks at 9:48 PM 1 comment: