...Is a webcomic that I am working on! It is an episodic quest story that combines elements of fantasy, action and the idiosyncrasies of being a modern musician. I thought I'd make a pitch-post for it. :D

I had another Webcomic idea that I planned on pursuing, but I think this one will be better for starting out with. Right now, I have finished the script for the introduction and have begun drawing it; the introduction should be all drawn by the end of May! And, it will have a short cameo of the guys of Walk the Moon.

The script for the first chapter is also underway; it's probably about 80% finished. In short, Band Quest! will be episode/chapter-based - each chapter will have its own set of main characters. This will allow me a bit of freedom to explore the dynamics in personality between very different sets of characters. It will be drawn in a Sunday-strip layout, and the first chapter will feature a band with a lineup inspired by the great music of the Seedy Seeds.
If you all haven't had the chance to meet me at one of the Conventions I've been to in the past couple months, then you won't have had the pleasure of seeing this little book yet: 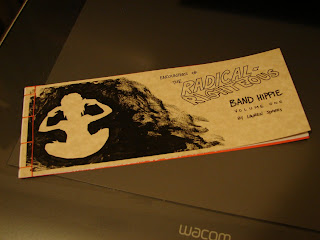 I had the idea for this band-questing concept over a year ago, and it first manifested itself in this little book. And I was planning on starting a webcomic up, but with a different story - however, when my friend Pranas read the Radical-Righteous Band Hippie comic, he suggested that I develop THAT concept further. And indeed, when I polled my friends between the two stories, there was much more interest in this Band Hippie story. So, I decided to roll with it. :) THANK YOU PRANAS!!! 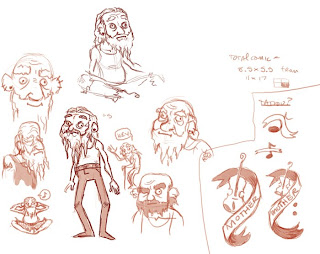 Above are my original Band hippie concepts - he'll look most like the top center drawing.

As for technical stuff, the comic will be drawn, as said, in a strip-format similar to newspaper Sundays. The final artwork will be drawn traditionally in graphite and sketchwash/watercolor pencil, and then monochomatically toned in Photoshop. My main reasons for making the artwork traditionally are A. it looks better, and B. so that perhaps later on, I can make that artwork available for readers to buy and have a piece of the story as their own.

I'm working right now on the website design... ooooh, Comicpress is a doozy. But the overall design of the webpage is inspired by the old Bill Graham poster art for bands in the 60s-70s; weird-beautiful stuff!

SO, I will continue to post progress up here under the tag "band quest"; and I hope whoever's reading will stay along for the story. :D
Posted by Lauren Sparks at 1:24 PM 1 comment: