Oh man, I suck at writing blog posts when I'm stressed... Which is probably why I often don't do it at all. But I NEEEEED to post this one - if you're located in the Netherlands, read closely!! 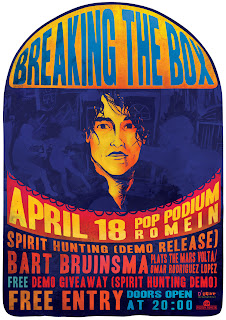 It sounds like an awesome show, and is next week!!!

This was a REALLY fun project.  I enjoy working with musicians a lot, and have done several album designs, but this is my first concert/tour poster design.  Bart had a lot of cool ideas that I was able to incorporate, and I. Love. How. This. Project. Turned. Out.  I made several other concepts for this poster, these are some favorites (sketched traditionally ink/pencil/watercolor pencil with some digital enhancements/text):

One goal was to make use of the negative space of the paper, to make that space intentional, since Bart would be printing these himself without trimming. I had a lot of other ideas for the poster's palette, too, which were a LOT of fun because Bart wanted it to be somewhere along the lines of a COLOR ASSAULT, which I rather enjoy making... :)

UPDATE 2013-04-16: I got a question from @DannyMonzillo about which parts of the poster are traditional and which are digital, and figuratively smacked myself in the face because I had originally intended to talk a bit about that but forgot in my sleepiness.  In the final design, the drawing of Bart's face and the background illustration of someone getting shot were drawn traditionally with ink, and integrated digitally.  There is supposed to be nothing flat in the design, so I went traditional for these elements to get the texture of a brush in. 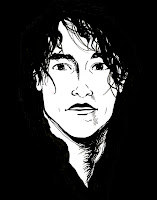 There are also several textures (photos/scans) layered in, which I got from my own homemade texture archive and these STELLAR people: lostandtaken and Simply Textures!

Here's a PRO TIP: Bart wanted some secondary imagery in the background of the poster, something you'd notice on a second look. Hence, the illustration of someone getting shot layered in like a texture in the largest dark-blue part of the final design, around Bart's face.  Here's a section of the raw scan: 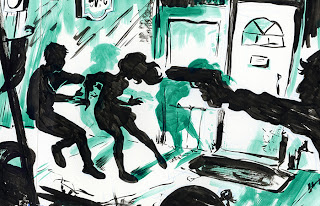 Looks pretty funky, huh?  You can even see the seam where I had to tape on another piece of paper.  But there's a method to the messy odd-colored madness: I used the select color range tool in Photoshop to pull the black sections and the green sections out of this drawing onto their own separate layers, and then manipulate their color independently. You can use any second color, I just had a brush pen with green ink on hand.  I used this trick a bit in the drawings of Nick and Eli previously. MY SECRET IS OUT! Hope someone's able to put this method to use in their own situation, it's VERY useful for digitally integrating hand-made elements. :)


IN OTHER NEWS.  I'm currently working on illustrating a comic book issue for the indie series "The End" by Shawn Murphy, which is really kicking my butt... HOWEVER, it's coming along nicely and I hope to finish it within the next 3-4 weeks so I have time to prepare for HEROESCON!!!
Posted by Lauren Sparks at 10:02 PM 1 comment: