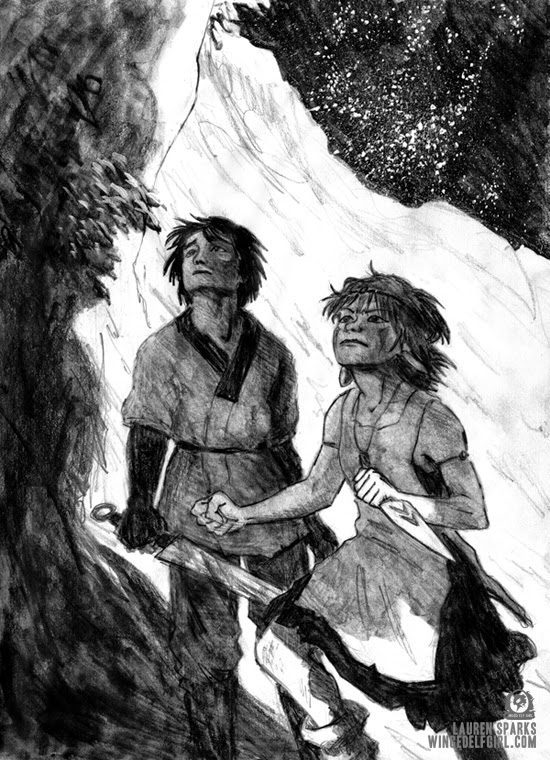 San and Ashitaka: two of the most badass cartoon characters ever.
(Drawing by me- I don't recommend using sketch-and-wash on regular sketchbook paper, like I did.)

Did you know I love 2D animation?! I do. I LOVE it. The films of Studio Ghibli, primarily those directed by Hayao Miyazaki, were a huge influence on me when I was a teenager and an important factor in my decision to study 2D animation (for OBVIOUS reasons).  So I have been having many mixed feelings and stirred-up memories after reading about the state of Studio Ghibli lately.

There’s a thing about “idolizing” the things we love in high school- the work of musicians, authors, film stars, whatever we love; and I think it’s because we cannot fully appreciate them when we’re young.  When we grow older, and begin to learn the skills and working methods that went into creating those things which we idolized, our perspective changes.  We see how they were made, and they often aren’t very impressive anymore. We learn that (BIG SURPRISE) when we were younger, we may have had TERRIBLE taste.  But in regard to both the old and new films from Ghibli, I doubt there were many artists who would say “I liked them more when I was a kid” (the perpetual refrain of the Nostalgia Critic).  I can see now how the films were made, can take educated guesses at the techniques used, but my admiration isn’t lessened at all. There’s too much skill and control of the animation craft, both a deep maturity and childlike wonder in the stories, and relentless production quality from the artists at Ghibli, for the films they’ve made thus far to ever lose their high standing with me.

I'm not terribly surprised that Ghibli's production studio is being temporarily disbanded, restructured, whatever.  Reading about all of this reminds me of a person to whom Hayao Miyazaki is often compared – Walt Disney.  But MAN were they different.  Lots of people have called Hayao Miyazaki "Japan's Walt Disney", and hearing about the state that Ghibli is in without him has thrown a lot of those differences into sharp contrast for me.  I think the main thing that makes people pair them up is that both are/were leaders of 2D animation studios which strove to create imaginative, all-ages animated films and both were successful; but that’s pretty much the only similarity.  Well that, and the penchant for smoking that everyone wishes/wished they would quit.

For instance- Walt Disney worked as an animator when he started his first studio in Kansas City when he was in his early 20s. But by the time that studio went bankrupt and he'd moved to California to start up a new venture with his brother, he’d realized full well that his skills were in determining the structure and emotion of a story, not in drawing. And he gladly handed off those responsibilities to better artists. Miyazaki, though, is a FANTASTIC artist. He started as an animator in the 60s and worked up to the position of director in the late 70s, illustrating some gorgeous manga on the side. Miyazaki is very much an auteur in a way that Disney never was, though he doesn’t draw every frame of his movies* (he’s got a bit more of a realistic outlook on that point than, say, Richard Williams- hur hur**).  He does, however (from what I can tell) draw pretty much all the storyboards for the films he directs and works closely with the concept artists and character designers, drawing a lot of pre-production art himself.  Disney certainly reviewed his artist’s concepts and pre-production artwork, and made suggestions on them based on his artist’s strengths and specialties, but didn’t draw any of them.

I think this is the biggest difference between these two men – the difference in their direct involvement in the production of their studio’s films, and the HUGE difference in impact that their leaving had on their respective animation studios.  Disney’s involvement in animation went in phases depending on the other things he was simultaneously working on – the Disney TV show, the theme parks, the live-action films. (There’s another difference- Disney had his hands in SO MANY different entertainment projects; Miyazaki is solely a filmmaker.) He knew his artist’s strengths very well, and gave assignments accordingly; helping them to realize what they were capable of in the process.  He had the final word of approval on everything the studio produced, but towards the last decade of his life he was generally less and less involved in animated productions.  Because of this, the Disney studio had relatively few troubles in continuing to make films after he died (though their quality for the 20-ish years after his death is debatable). That's a strong contrast to Miyazaki's depth of involvement in his own films, which becomes quite obvious as we can see how the studio seems (to me, from what I have read) to be floundering a year after his retirement.  I’m intensely curious about the methods of production at Ghibli, but I haven’t found much reading material about it.

I know that in past years Miyazaki and Isao Takahata (the other main Ghibli director) have expressed concern about finding directors to replace themselves, to "pass the torch", but have had trouble finding the right people (Not finding good enough animation directors to take their places, IN JAPAN?!!).  I don’t know a whole lot about this situation and search for talent, but it seems pretty evident that they’ve had trouble with it if, without Miyazaki, they do not have the correct mix of artists required to continue making films.  (If anyone else knows more about this lack of directors/artistic leaders at the studio after Miyazaki’s retirement, I’m glad to learn more about it).  If they have had trouble finding leaders they approve of, that leads me to believe that either: A. They were being more picky than is practical in choosing new directors; or B. they were unsuccessfully looking for someone who could continue to create films like Miyazaki (or Takahata).

I can easily understand the route of being overly picky, and am inclined to think that’s the issue at hand. Miyazaki and Takahata started the studio and have directed the majority of its films!  Of course it must be difficult to hand over control to someone new!***  And to try and find someone to continue making “Miyazaki-ish” films is pointless.  That's like Wes Anderson saying he's going to retire and look for someone to continue making "Wes Anderson-ish" films. There is no point in trying to forcefully replicate the strong artistic vision of one person after they have stopped; you have to move on to something/someone else.

There’s nothing wrong with moving on from admiring one artist to another – it happens naturally throughout our lives, whether the artists continue to work or not.  Think about the style of music you enjoyed in middle school compared to now; it’s very likely that your taste has changed. :)  The retirement of Miyazaki and the possible stop of production from Studio Ghibli is definitely sad, but I wouldn’t call it TRAGIC – compered to, say, the loss of Satoshi Kon.  It’s been a great several decades with Ghibli, and I’ll miss Miyazaki’s presence there, but - to be honest - it won’t be difficult to move on. Cheers to all the great memories, Ghibli!!

I’ve read in a couple places that Hayao Miyazaki may return from retirement (yet AGAIN!) to help with production of a new short film for the Ghibli Museum.  At this, I can only shake my head and grin – it’s like he can’t stay away.  Maybe another similarity between Walt Disney and Miyazaki will appear if he keeps this up: if he passes away in the middle of working on something. I wouldn’t be surprised in the slightest.

*Though he evidently did re-draw about 80,000 frames of animation for Princess Mononoke. I kind of doubt he ever did that again.

**I am NOT poking fun at Richard Williams.
…OK, yes I am. But I LOVE his work. He’s one of the few animators alive that I would say are on the same level of mastery as Miyazaki, and he did animate the better part of an entire feature film with his own hands (The Thief and the Cobbler) - over the course of 30-odd years.  There are other auteurs, Bill Plympton, Nina Paley, Don Hertzfeldt etc., who HAVE animated a whole feature by themselves (MULTIPLE FEATURES in Plympton’s case) - but their respective techniques of animation lend much more readily to that feat than Williams’ or Miyazaki’s.  Plympton/Paley/Hertzfeldt’s styles are all very different from each other, and miles away from the work that Miyazaki and Williams have done; it’s comparing apples and oranges.  TLDR: It’s good for one  to know the realistic limits of their technique.

***But Ghibli is quite obviously BRIMMING with great animation artists, surely one of them could step up to directing??!! Maybe there are artists willing to step up, but aren't allowed for some reason?  It just doesn't make sense, from any angle.  Does Ghibli have much going on in the way of training up younger story artists under Miyazaki and Takahata so that they might build up the experience to be able to direct films for Ghibli as well? It seems appalling to me that they would be shortsighted like that.  That’s how it appears things are done in the story departments at Pixar, and seems really practical to me; somewhat like apprenticeship.  It's sure to be a much more complicated situation than that.  But then, it does also seem like Miyazaki drew the majority of the storyboards for his films; I guess that’s not very conducive to giving younger artists more experience.  Eeeeh what do I know, I’ve never actually worked for a big animation studio; I’ll have to ask some friends to find out more about that. :P

A couple of articles I’ve read lately about what’s happening at Ghibli:
http://www.telegraph.co.uk/culture/film/film-news/11018226/Studio-Ghibli-Miyazaki-may-return.html


http://variety.com/2014/film/news/japans-studio-ghibli-envisages-short-break-not-imminent-closure-1201274707/
Posted by Lauren Sparks at 1:31 PM No comments: