WHOAZ. Walk the moon made a really nice post about me last week, and I only got to reading it yesterday. O_____O I really don't know what to say besides, THANK YOU guys! they're so darn nice! :)

more drawings of Blanche, and one in color! have been working on Cat's design; trying to make him more realistic. the problem is, I've been using my own cat as model, and she's cute but FAT. anybody got a more in-shape cat I can use as model for Cat?

been playin' with textures. I really REALLY like the hatching texture. not sure if it'll have an impact on the comic... but you never can tell. 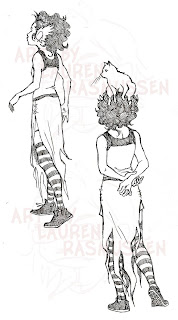 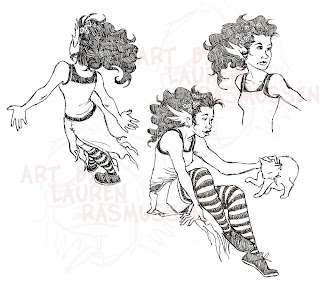 Posted by Lauren Sparks at 4:40 PM No comments:

ok dudes, i'll be in michigan with a lot of crazy children for the rest of the week. so here, have some comic strips I did for Larison's class year before last. should be amusing, on multiple levels. (and are all true stories. or at least inspired by.) 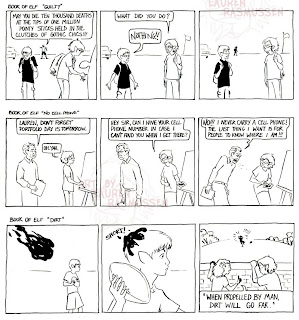 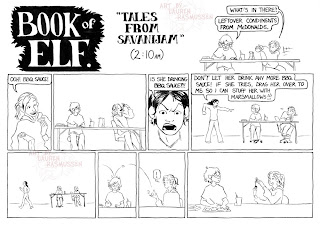 on a completely different note, the Animation Mentor webinar hosted by Bobby Beck and featuring DON HAHN talking about Walt Stanchfield and his two books was AWESOME!!!! (who's Don Hahn? look him up on IMDB and be intimidated.) i think one of the most fun things was seeing Mr. Hahn on a webcam in an office, and not in a studio-lit environment on a Disney DVD. there were lots of good questions, and i took lots of notes. maybe I'll post those later. :)
Posted by Lauren Sparks at 11:36 PM 1 comment:

hey now! the movie comes out next week, and of COURSE I had to re-read the book before I saw it. read it in 3 days (took up half my house-sitting evenings. that's why I never did turn a movie on.) without further ado: 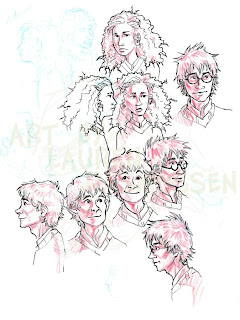 hopefully you can tell which are Hermione, Ron and Harry. i decidedly tried to make them NOT look like their actors, because the actors just look too good. and hopefully recognisability will cement once I color them. (oh yes, i fully intend on coloring these! what do you think the red shading ref. is for?)

not that it matters when the movie comes out... i'll be in Michigan with a lot of 3rd-6th graders next week/weekend. but i'll see it at some point. :)
Posted by Lauren Sparks at 7:45 AM No comments:

page of sketches from WTM's show at the mad frog a couple weeks ago. there's another page but not as good. so you get this one. :) 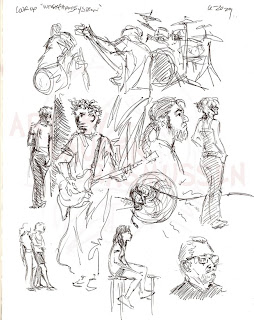 Who is Sebastian Jackson?

ok yes, this has to do with Walk the Moon. but FIRST, before you do ANYTHING, you have to go to the Birthday Boy website and listen to the song "Man on the Moon".

done? ok, NOW explanation.
Birthday boy is a side project of a couple Walk the Moon guys and they did a version of "Man on the Moon" with the full band for their B-sides album, calling it "The Ballad of Sebastian Jackson".

I became kind of fascinated with the character of Sebastian. what kind of passion, or insanity, drives someone off the cliff and maybe out of their mind? how did he get that way? where did it all start? (this is just my musing; there's more but i'll be short-winded. I still haven't asked Nicholas for his explanation.) completely disjointed from the Sebastian musings, I made the character of the moon man for the packaging of 'The Anthem EP' for the guys last summer, and it wasn't until 3 months ago that it dawned on me WHO the moon man might be. could this odd and empty universe he wanders through be Sebastian's purgatory/afterlife/whatever?

so, here we pick up the thread of Sebastian's life (or death), after he jumped off the edge. but as the end of the song makes me question, did his soul really fall back to earth? 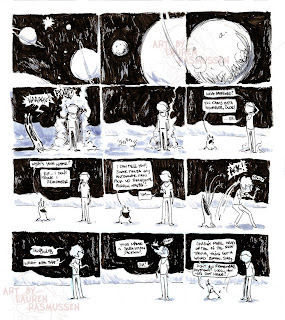 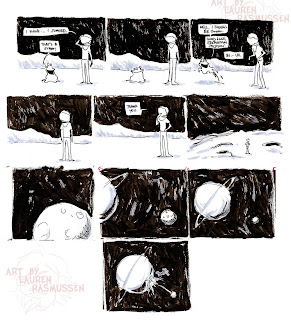 these are pretty rough, brush pen/micron/tomboe marker; but figuring out all the word balloons within the roughs worked really well! (inspired by scott mccloud's roughs for ZOT in that respect.) i think i'll adopt that technique for my other projects as well. and maybe someday I'll REALLY draw this one. :)
Posted by Lauren Sparks at 10:48 PM No comments: