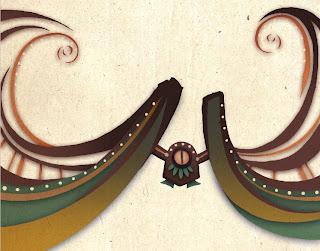 so this is a screenshot adding textures to what I've been working on lately; backgrounds for Chrystin Garland's senior Film. I'll post the finals if she says I'm allowed. :)
Posted by Lauren Sparks at 10:09 PM 2 comments:

MOLESKIN SKETCHING!
so I went to my brother's piano recital this evening, and LO there were children sitting on a piano bench, SITTING STILL, for a whole minute or MORE! so that is why here we have a lovely example of "A Lot Of Children (almost) All Doing the Same Thing (And a Dad)." 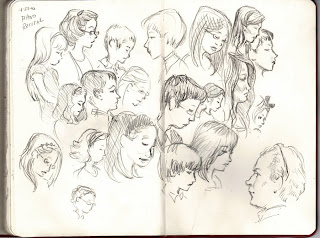 in less interesting news, I've been listening to Owl City's song "Tip of the Iceberg" over and over and over. it's like a story... I can see it in my head when I listen. I'd really love to do some sort of story animatic to the song (not a full-scale animation - won't have time, and I'd rather be paid. :) so, here are some character sketches.... the boy is based on Adam Young, a bit, naturally; the girl is loosely based on mah boss-director Chrystin that I'm currently drawing backgrounds for. because she's 100% awesome and 100% adorable. 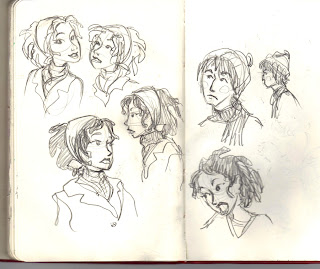 there will most definitely be AE snow. and something to do with ice skates. :)
Posted by Lauren Sparks at 10:07 PM 1 comment:

Waking Sleeping Beauty – a rambling, ranting review (since that appears to be the only kind of discourse I’m capable of creating.)

The last movie review that I wrote was for The Secret of Kells. I wrote that review because Jacques told me to. This one I’m writing because I said I would.

I saw Waking Sleeping Beauty at the Lucas Theater in Savannah; the screening was sponsored by the Savannah College of Art and Design, the wonderful and expensive school I attend for 2D animation and sequential art. I went to the theater with a group – we were rather early. I stepped out to the entrance of the theater to make a phone call, when a friend poked me in the arm and said “do you see Don Hahn standing outside?”

I instantly commenced quaking in my proverbial boots (literal tennis shoes). Don Hahn? The producer of Beauty and the Beast and The Hunchback of Notre Dame? HIM? HERE??!?! Well, there he was; on the sidewalk talking to Professor Moorshead. As I continued to quake, Professor Jantze walked out to join them.

I’d only seen Mr. Hahn live (sort of) once before – a webinar that the Animation Mentor school did a year ago about the release of the Walt Stanchfield duo of books that Mr. Hahn and compiled and published. Over the webcam, he gave a presentation on the importance of gesture, clarity, and solid drawing skills that are gold to a good animator. (I took notes). All the other times I’d seen him were DVD extras. But now, here he was IN PERSON, standing outside the slightly-scruffy Lucas Theater talking to my professors. I quaked and geeked and squealed to Professor Jacques in the theater lobby, until he finally got impatient and said “so go and say hi to him!” So I did.

I must’ve acted like such a nerd; oh well. I know Don Hahn is just a normal guy, like my fiancée and my dad and everyone else. So I’m not really sure WHY I was so nervous. No matter. At some point in the short conversation I said I would write a review, so I am, starting NOW.

Waking Sleeping Beauty is about the changing state of Disney animation between 1984 and 1994. The changing state being, of course, going from a ragtag and nearly doomed department of really old and really young artists to a huge, flourishing animated movie house that the world would not be the same without.

The documentary uses nothing but archive footage, both professional and personal, to tell the story of the time; with voice-over interviews by the players. The use of only archival footage and voiceover with not one present-day “talking head” in sight was immensely refreshing and effective. It both saved a ton of screen time and effectively put the audience into the mindset of the film – a reminiscing; a looking back. The film overall also did a wonderful job of staying neutral – I think in the largest part because the views of the people who were all butting heads at the time were each allowed to say their piece, and they do so with feeling, but not with anger or animosity. I guess time is a good healer.

The film is informative in a way no DVD extra with an animated movie could be – it examines the politics of the studio throughout that 10 years, and the animated films produced serve as almost bookmarks to note what year it is as the artists just keep working and getting better. It also takes time to step back from the politics and talk about technological breakthroughs that shaped the animation department, while the whole time managing to be genuinely funny and entertaining while the people from the animation department have genuine fun themselves. (That is to say, if the artists are having fun, so are we.)

In summary, Waking Sleeping Beauty is a great memoir, documentary, drama and work of art all rolled up in a truly entertaining movie. (Be aware, this is coming from a certified Disney Geek, so I could be biased. Possibly.)

There was only one thing I wished as I was watching – as archive video and photos were shown on the screen, often the person narrating at the time and anyone they talked about would be labeled in the images, but nobody else. I’m beginning to think this is just my geekiness taking over, but I wish that the other people in the photos and video had been noted somehow – especially that photo of the first graduating class from CalArts. I just think it would be fascinating to be able to know who everyone was, because so many of them are still well-known in the industry today and it’s so fun to see where they started and know where they went. (And for recognition purposes. That 80s hair makes people look so different!) But who knows, maybe that will be an extra option on the DVD. I sure hope so.

Go see the film if you can! It’s wonderful! And shake Don Hahn’s hand if he’s there. 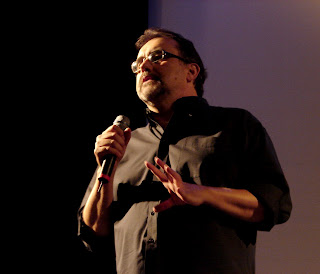 A drawing of Blanche; pose inspired by Wybie in Coraline. Warming up to work on backgrounds for Chrystin's film Ma Monde. i'll have to ask her if I'm allowed to post those on here. :)

in other news, I'm back in Cincinnati for a little while - not sure how long. I might MIGHT be getting a freelance animation job from a really nice guy who's based in Savannah, so I'll be moving back there with Renee and Kyle if that pans out. if not, I'll be staying at Standex Electronics for the rest of the summer. at least it pays all right.

in other OTHER news, I shook Don Hahn's hand Monday evening. EEEEK!!!! I'm still geeking out! I got to talk to him just before the screening of his film Waking Sleeping Beauty. I said I would write a review for it, and I did; so that will be posted next.

we'll see what other exciting things happen the rest of the spring and summer.... If I could get married, that would be awesome. unlikely, but AWESOME. man, I really want to be married. YOU HEAR THAT, MATT? I REALLY REEEEALLY WANT TO MARRY YOU!

Ta ta for now!
Posted by Lauren Sparks at 7:53 PM No comments:

A 9-page comic called "Like Lightning (or The Firefly and the Photo-phobic)".

So, here is the comic story in thumbnails. I wrote it this past fall and Professor Kneece said that it was pretty good, So I'm going to try and finish it off for the career fair next week. whether or not I finish on time is a bit... spotty. I'll do my best. 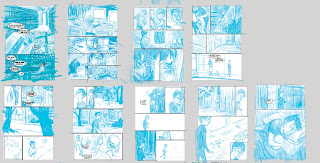 And here is one page that's completely done! Page 9. Always do the last page first. 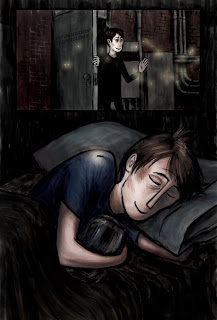 Posted by Lauren Sparks at 12:36 PM No comments: