Posted by Lauren Sparks at 6:37 AM No comments:

Faces with and without facepaint

So, this past Friday I went to a rock show down in Covington KY and got to see WALK THE MOON headlining, with Shadowraptr and the Young Heirlooms. it was a FANTASTIC show. if you don't know who Walk the Moon is, you have not been reading this blog very long. Go watch music now. :D

SO! LOTS OF FACES!!!... and also the statue of Eve from the Cincinnati Art Museum. Her page needed to be filled. 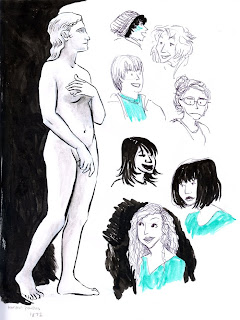 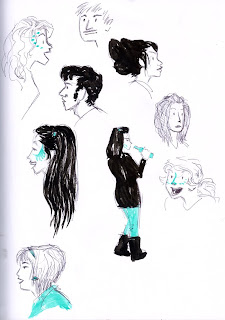 Drew with black ballpoint pen, and two Pentel pocket brush pens - one with black ink, one with green. GREEN. Also, in the page below, Mr. Snark on the far right is one of the guitarists from Young Heirlooms! :D 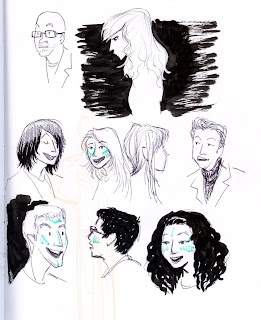 And, the bottom four faces there are the Walk the Moon dudes: 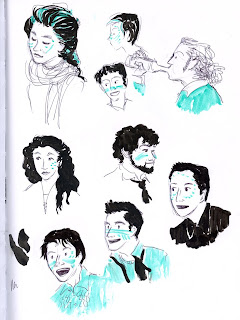 THANK YOU FOR SUCH AN AWESOME SHOW, GUYS!!!!! You rock my world. :D
Posted by Lauren Sparks at 9:53 PM No comments: 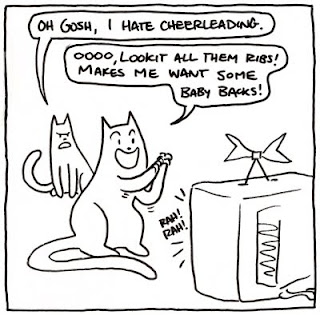 Hey everyone YESTERDAY WAS THANKSGIVING!!! :D hence, the somewhat food-related comic! HOPE EVERYONE HAD A GOOD DAY OFF!!!! And if you have a retail job today, I am very, very sorry. :(

My family had some friends over for the feast, one of whom was a rather older lady named Mary Jo. She told me a story that I really, really want to make into a comic:

In Covington Kentucky years ago, there was a neighborhood by the Ohio river that had a horrible time with river rats. They would get into the sewer pipes, and climb up into peoples houses. one lady in this neighborhood even saw a rat climb out of her TOILET. Now, there was another certain lady in this neighborhood, who was very helpful and devout. She prayed to God to please make the river rats leave, because everyone was scared and miserable. Then, one morning, this devout lady walked out onto her back porch and there were nine tomcats sitting there, quite at home. She was very puzzled, because tomcats as a rule do not get along and hate each other. but, being a kind woman, she went back into the house, got some food and fed them. Over the next few months, those tomcats kept hanging around, and she kept feeding them. At the same time, the river rats slowly started to disappear.... until there weren't any left, in the whole neighborhood. And when there were no rats left, the tomcats disappeared as well. The end.

I do enjoy drawing cats, as most of you know, and this story just has such a funny root. I would be so happy to be able to draw it some day. :)
Posted by Lauren Sparks at 9:23 AM No comments:

But Sir! What happened to your face?!

And now, some more concepts and illustrations! Here are some faces for some of the secondary characters:

Because the job was so rushed, I actually didn't get to use all the characters that I'd designed. Ah well, se la vie. Here are some more illustration planning/thumbnails: 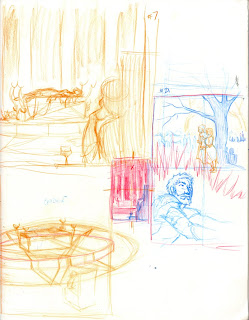 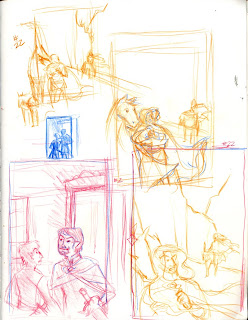 I was really inspired by the work of Mark Schultz around the time I was doing these - he had come to SCAD this past spring quarter as an artist-in-residence, and I got to know him a bit - such a kind, amazing person! and HIS ILLUSTRATIONS. O LAWD HIS ILLUSTRATIONS.

The play of light and dark to control mood in a single, unmoving is a lot more difficult than it might seem. in animation, you can utilize the motion to get more out of each scene; in Comics you can play out the action and lighting over many panels to create the effect. I think one of my problems here might have been how much I was trying to cram into each illustration, because I knew that I didn't have time to do a lot of smaller illustrations. Pros and cons, pros and cons. 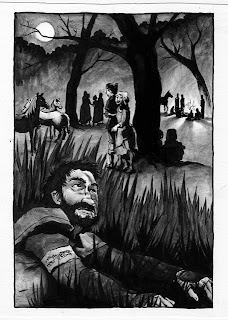 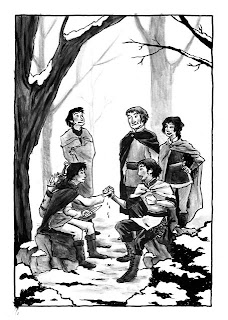 Posted by Lauren Sparks at 7:09 AM No comments:

As promised a couple MONTHS ago, a BIG FAT UPDATE on Gary Blackburn's film Elyn and the Pirates of Sunderland!!! This was an extremely interesting and new sort of film for me to conceptualize. In one word: STEAMPUNK.

At the beginning, while helping Gary finalize the script, I did a TON of research, and after a lot of doodly beginnings, first laid out a general map of the entire floating island that is Sunderland Town. then, I zoomed in and laid out the town itself, and figured out a rough course of action for the characters. 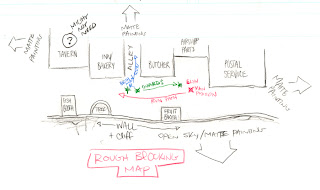 I don't necessarily care if it doesn't make any sense to you. this was the beginning of the town; without this plan I couldn't have gone on in any sort of organized manner.

Next, the main points of interest! the first being this fruit stand: 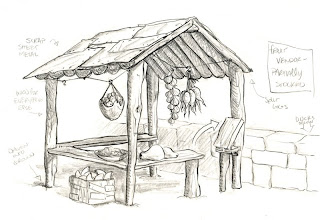 and a fish stand nearby that our main character would be running around later. Gary was very specific in that he only wanted to model the set pieces vital to the camera movements; the rest is to be matte-painted to flesh out the look that he's going for. that is why the above map/plan was so vital to figure out exactly what would need to be designed first. 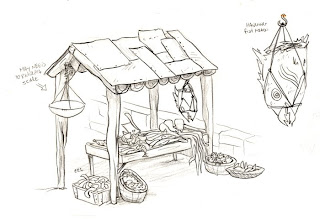 Now, buildings! I had the buildings marked on my map, so I knew exactly which ones would be needed for close-ups and part of the action. 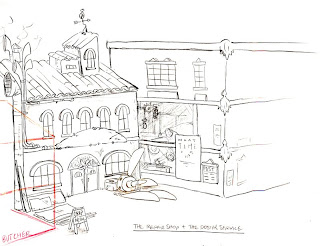 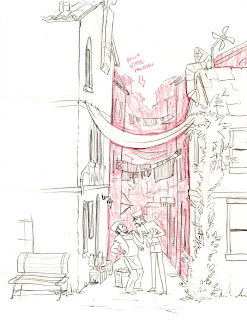 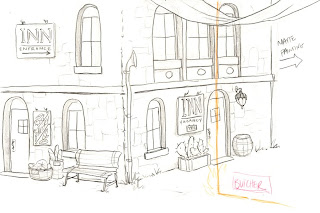 I still don;t think I pushed the steampunk aspect far enough - machiney things are not my natural forte. But to go much more in-depth into research would've taken more time than I had on hand.

Next, I did flat map drawings of each side of the street, to be absolutely clear on building placement, scale, and to give more facade details. 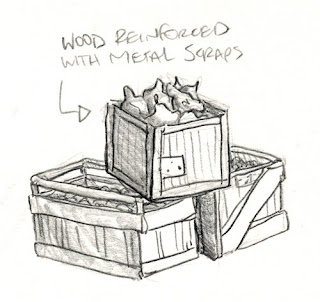 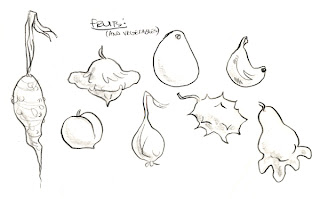 The signs for a lot of the buildings were fun to research and design - I'm not sure if they'll be used, but I don't mind. 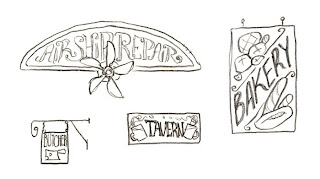 Here's the production blog on Facebook for the film - if you scroll through, you can already see some of the models made from these sketches. It's amazingly unreal to see them that way. :D
Posted by Lauren Sparks at 7:10 AM 1 comment: