Carlo Collodi is a fun name.

Quote of the day:
"You're dead if you aim only for kids. Adults are only kids grown up, anyway.”
--Walt Disney (from this kinda cool LIFE photo essay)

A month or so ago I was with Matt at Half-Price Books, and picked up Carlo Collodi’s original Pinocchio story. And then I drew this. 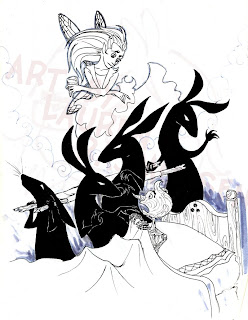 (ink and marker over blue line)
YES. In the original story there are creepy ghost bunnies who come and wait for Pinocchio to die and take him away because he won’t drink the medicine the Blue Fairy makes for him. Pinocchio was a BRAT. But he’s not, by the end.

I still love the film Disney made of this story. It’s art! It’s BEAUTIFUL animation, and though they changed the story a lot, it still is a great story. *suppresses the urge to gush and geek out.*

However… in the film, Pinocchio is just naïve, rather than a real brat. (I know why Walt said to change it though - the original story treatment was very like the book. but, they way ol' puppet-head is at first, you kind of hate him, and Walt's all about the sympathetic characters.) Stromboli was called Fire-eater, and he wasn’t really that bad. Pinocchio himself was both the bad guy and the antagonist (at first). Somehow, with him being so awful at the beginning and slowly changing throughout the fairly long story, it’s got a bit more weight. Leastwise, that’s MY humble opinion.

Posted by Lauren Sparks at 5:34 PM